On a cold blustery evening during Semester 1’s mid-term break, the scent of freshly cooked and barbequed food wafted through Law School, but where could the source of such ambrosia possibly be?

It was the Pro Bono Group’s first cohesion and bonding event of the academic year! After several rounds of Frisbee, 30 eager (and really hungry) members converged onto the upper quad to start the BBQ fire, together with our guests Mr Lim Tanguy, Director Pro Bono Services Office at the Law Society of Singapore and our very own faculty advisor, Professor Helena. This was a great chance not only for new members to mingle with the old, but also to glean insights from our guests on furthering their pro bono passions.

It took some time to ignite the charcoal under such windy conditions, but with guidance from Zhikang, who was also one of our photographers for the event, we managed to get the fire started and the party began! Out came the barbecued chicken wings, sausages, grilled stingray, together with the mooncakes. Our President Jian Kai started the ball rolling by belting out his rendition of popular songs on our makeshift Karaoke system, and soon almost the entire Exco was up there singing with the new members as the night wore on. We also tried to decorate a tree with lanterns, the cohesion being very near to the Mid-autumn festival. Indeed, the song and food engendered a very jovial atmosphere, ensuring the success of the cohesion! And the evidence follows… 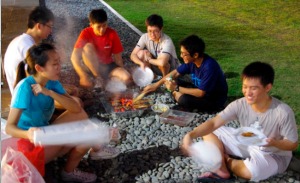 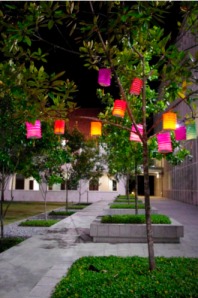 This year, PBG has more than 200 members across the various 8 projects. Our first major event of the year, the annual cohesion, took place on 5 September 2020.