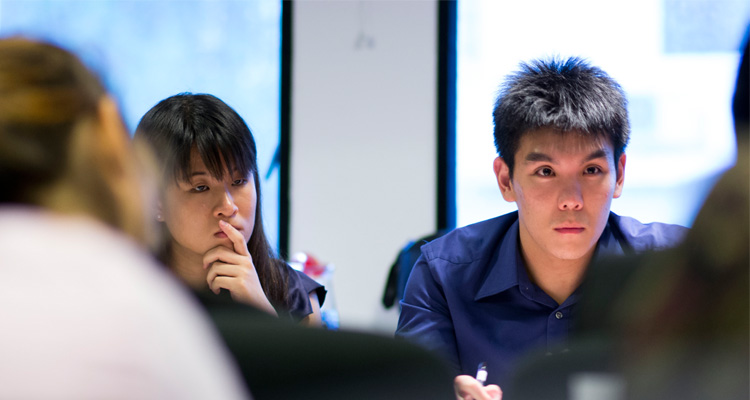 The first thing we do, let’s kill all the lawyers.

Calls to cull lawyers are (thankfully) rare today, but the contempt for a “lily-livered, action-taking knave” has certainly lived on. Which could well be the reason for Team NUS to point out that lawyers — being the “shallow…three-suited knaves” that they are — are doomed to the abode of Satan. Unless, of course, they do legal work pro bono publico.

As part of the inaugural Pro Bono Week organised by the Law Society, last Monday’s NUS-SMU Inter-Varsity Debate (press coverage here; Justified’s article here) saw a pair of students and a practitioner on each side of the fence arguing for and against the mandating of pro bono work for lawyers. With litigator Mr Adrian Tan — himself a talented debater, and also the author of two best-selling books made into a movie — moderating the dialogue between two animated teams, the audience was treated to a delightful evening of quotable quotes, spirited repartee, and good-humored teasing.

Team NUS opened the debate with a lighthearted appeal to utopia; to them, the admission to heaven for lawyers is premised upon work done on earth gratis for the poor. On a more serious (and certainly immediate) note, they asserted that a mandatory pro bono scheme gives voice to the duty lawyers owe to society; that the corollary to the power lawyers have is the responsibility they owe to their fellow men. This was the sole undisputed fact in the debate, with Team SMU concurring that it is indeed honorable to render one’s legal services gratis to the underprivileged. However, as the SMU team went on to argue, “compelled voluntariness” is an aporia destroying precisely this sanctity of pro bono work, which should therefore remain a volitional undertaking. This split in views between the two teams was echoed throughout the debate, with Team NUS further asserting that pro bono work not only promises an afterlife in paradise, but also contentment on earth in the form of Immanuel Kant’s Rules for Happiness: “Something to do, someone to love, something to hope for.”

Recognising the importance of ensuring access to justice, Team SMU echoed Chief Justice Chan Sek Keong’s comments by proposing that lawyers who choose not to do legal work pro bono may contribute in kind by donating money, a position their NUS counterparts took issue with. To them, lawyers — unlike a prominent local plastic surgeon — cannot use their money to let someone else take the rap.

Another contentious point raised during the evening dealt with whether pro bono work is even a suitable undertaking for all lawyers. As Team SMU put forward, while pro bono work usually tackles criminal and family matters, some lawyers specialise in other practice areas. Providing non-paying clients with inexpert advice would be doing them an injustice, the SMU team contended — and making, it would seem, pro bono work turn out pro malo. To this, Team NUS pleaded that pro bono work serves to expose lawyers to the level they can rise to — that even if a horse brought to water may not drink, at least it gets its feet wet. Additionally, the team argued that mandating pro bono work will change the profit-focused culture in many firms and lower the profession’s burnout rate.

A broader policy issue was also raised by Team SMU in advocating that making pro bono work compulsory is a mere stopgap measure in addressing the lack of access to justice. Instead, the state should take more responsibility, for instance by funding public defenders as the US has done. To this, the NUS team suggested that where there is no such scheme in Singapore, mandating pro bono work is all the more important in bridging the justice gap.

The attraction of the evening was arguably the lawyers recruited by each team — accomplished debater Mr Vishal Harnal for NUS and pro bono advocate Mr Abraham Vergis for SMU — who were particularly engaging as third speakers summing up their respective teams’ arguments and taking questions from the floor. The “National Conversation…with different views” — as humorously termed by Adrian Tan — finally concluded with the judges awarding the winner’s title to Team SMU. The efforts of Team NUS were also duly honored with the silver medal, and both teams, as true “adversaries do in law / [strove] mightily, but eat and drink as friends.”

Indeed the debate, as part of a range of events for Pro Bono Week, was far from a confrontational clash of irreconcilable adversaries (particularly since, as it was teasingly pointed out, SMU has a mandatory pro bono scheme and NUS does not) — but a well-intentioned exchange designed to encourage reflection on the role of lawyers within society. Many stayed on to exchange their thoughts and experiences on volunteering, and this writer gladly joined the NUS Pro Bono Group after the event.